A reflection on Adoption Awareness Day

On Saturday, November 19, National Adoption Day was celebrated around the country. You may have seen posts on social media with adoptees, birth parents, and adoptive families sharing stories about their role in the adoption process. You may have seen news reports about adoption finalizations that took place on Saturday. Here at Good Shepherd, we celebrated Adoption Awareness Day with a new and special event.

For the first time, we hosted an “Adoption Awareness Day”, with the intent to spread the word that adoption is a brave, loving, and life-giving decision. Good Shepherd, and one of our legacy agencies, Catholic Services for Children & Youth, has been serving birth mothers, adoptive families, and adoptees since the mid-1850s. Because of this, we have been blessed with a rich history of creating families through the Archdiocese of St. Louis. To this day, we serve women who are choosing adoption for their children, we serve families who are waiting to be blessed with a child, and we serve babies and children who are in need of a safe and loving family.

However, the term “adoption” can convey different things to different generations. “Back in the day”, adoption was not seen as the positive and life-affirming act that it is now. Whereas many adoptions before recent times have been closed, meaning that there is no contact between birth mother and their birth child, today, we find that many adoptions are open or semi-open, meaning that adoptees and their birth families maintain some level of contact, usually manifesting in letters, photos, updates, and visits. Additionally, we find that adoption is not as readily chosen by women and couples who face an unexpected pregnancy. With the prevalence of abortion as well as the acceptance of single motherhood, adoption is not as utilized as it has been in the past.

We believe that adoption is a loving and life-giving decision. We believe that the gift of life, to bring a child to term and entrust a baby to another family, is the most selfless decision that a birthmother can give. We don’t believe in “giving up” a baby, we believe in giving life. 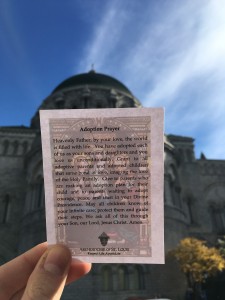 To share this, we created Good Shepherd Adoption Awareness Day. We invited volunteers, friends, family members, and supporters to join us to help spread the word that adoption is loving and life-giving. On Saturday morning, we had volunteers that were college students, high school students, families, staff, and friends join us for Adoption Awareness Day. We fueled up on bagels and coffee, and headed out into neighborhoods of St. Louis to canvass and spread the word. We had volunteers go to the Delmar Loop, Kirkwood, South Grand, Clayton, and Webster to hang up flyers on community bulletin boards and share pamphlets with businesses. We also had a task force stay at the office to stuff and mail envelopes to middle schools, high schools, parishes, and churches, promoting adoption awareness in this way. The eight volunteers that were out in the community visited over 75 locations, including restaurants, police stations, small businesses, and coffee shops. The volunteers that helped out at the office sent 133 letters. With just the thirteen people that we had volunteering over a few hours on Saturday morning, we made a huge impact in adoption awareness.

After our volunteers returned and had some lunch, our adoptive families joined us for a prayer service to conclude the day. We had extended an invitation to join us at the prayer service to all of our adoptive families, but didn’t expect many families to bundle up their babies and spend a precious Saturday afternoon at our offices. However, we were pleasantly surprised that two recent adoptive families were able to join us. Nine month old William, whose adoption was recently finalized, had been brought by his dad John and his mom Tracey, and one of youngest adoption clients, 7 week old baby A, was accompanied by his mom, grandma, and aunt.

We had some time to chat as we were finishing up lunch, and to hear details about both William’s and A’s adoption stories. Though both babies were born months apart, in different areas, in different families, the joy when they spoke about their sons was universal. We gathered into the chapel to read scripture and pray for all of our clients in the adoption process.

As we headed into the chapel, I tried to prepare myself to change out of the “work” mindset – to get out of a sense of productivity and effectiveness, focus on prayer rather than the results of our day. I had been stressing on how the day would go, what an impact we would make, if it would be worth it to invest resources in spreading awareness if the message would not be well received. I had been focused so much on the technical and logistical aspects of the day that I hadn’t taken time to “zoom out” and see what the bigger picture was.

So when I began to settle into a different mindset, to begin to give thanks for the great weather we had, for the volunteer turnout, that the day had gone smoothly, my attitude began to shift. As a group, we began reflecting on the volunteer experience of the day. We had a family of three volunteer, a mom, dad, and their 10-year-old daughter. Their daughter had been adopted at birth, and was eager to share her personal experience with adoption. The three of them reached over thirty places and were so kind to share their story. We also had a group of college students home for Thanksgiving break. A few high schools students showed up to volunteer as well, to canvass the South Grand neighborhood. When they came back from volunteering and had some lunch, they asked if they could have another neighborhood to bring flyers to, as they weren’t ready to be done volunteering! We were so blown away by their willingness to serve even more, and then we discovered that they weren’t in need of service hours or a project, they had just come out to help. As I was reflecting over this, I gave thanks for the truly wonderful people I had met – all former strangers – who had heard about our adoption awareness day online or through their school and had come out to help. 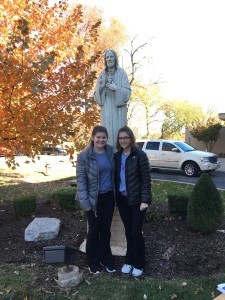 After reflection, we started praying, read scripture, and prayed individually for our clients. We prayed for each and every one of our waiting families, and prayed for their strength and perseverance in the adoption process. We prayed for all birth mothers, those who are pregnant and struggling with their decision, as well as for those who have placed their children five, ten, twenty, even fifty years ago. In this line of work, we know that choosing adoption is not an easy, quick, or thoughtless decision. Adoption is brave. Adoption is choosing to give life, to sacrifice one’s own needs for the needs of her child.

As I thought about the two beautiful and perfect babies that were just a few seats over in the chapel, I began to realize that this type of love is greater than anything I can imagine. Though I don’t know either baby’s complete stories, nor are they mine to share, I can imagine that their birth mothers sacrificed a great deal to give them life. To choose adoption in a time when other options are so widely accepted, even encouraged, is an incredible gift.

In the weeks leading up to this adoption awareness event, I was stressing about whether it would be a success or not. During the prayer service, when I looked over at a perfect, not yet two month old baby, snug and soundly sleeping in his mother’s arms, I realized that no matter what, this day was a success.  If we can honor the sacrifice of this little boy’s birth mother and lift her up in prayer, if we can honor the pain, patience and strength of his mom and dad in the adoption process, and if we can pray for him and all children in need of a safe and loving home, then this day has been a success. If our message reaches one person in the 75 businesses we left materials with, or one person who sees one of our 40+ flyers out in the community, or reads one of the 133 letters that we sent out, then this day has been a success. As always, we work to continue this integral part of our mission: to connect children with families and keep families connected. We look forward to next year’s adoption awareness day!