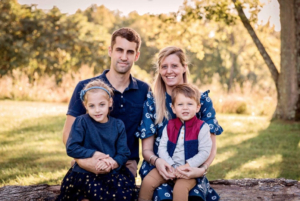 Brock and Kate adopted their son with the help of Good Shepherd and have an open adoption.

Why is it important to tell your child his or her adoption story from the beginning?  You want to be able to tell them later on that they know these people – they’ve known them their whole life. The birth family has been getting stories about our child their whole life. We also want our child to understand that their birth parents were young and couldn’t parent them then, but that they were loved. It’s important to tell our child their birth parents placed them with us not because they didn’t love them, but because they did.

What can building trust, openness, and relationship between an expectant parent and a prospective adoptive parent look like?  (Kate) We were so open.  Every time we talked about something, I would tell the birth mother that if she was changing her mind, she should never ever feel like she couldn’t tell us. We told her we would accept whatever she thought was best because only she knew what was best.

Is it always the birth mother’s choice to place her child?  (Kate) Yes. Friends ask me why would I ever say that to the birth mother or why would I give her “an out” to change her mind. I tell them it’s really important we know that she feels she has made the right decision and that she is comfortable with that decision.

What can visits within an open adoption look like? Openness can look like giving the birth parents and adoptive parents the opportunity, every year on the child’s birthday, to get together and have a meal and some cake. It’s a celebration of the adoption triad relationship.

What advice would you give an adoptive mom regarding openness and developing a relationship with the expectant mom?  (Kate) You just have to be honest with yourself. You can’t be afraid to say, “Are you sure this is what you want to do?”  You have to be willing to make sure the birth family feels they are making the right decision. I think that that was the most important part of openness for us, reiterating to the birth mother, “Are you still feeling ok?” I wanted to reassure her that we supported her whatever she wanted to do, and she should never feel like she couldn’t change her mind – because it’s her child.

What were your extended family members’ feelings about you adopting a child and, in particular, having an open adoption? One set of parents were completely open to it. The other set were guarded at first, until it was a sure thing, but then they were just excited that we were going to have the opportunity to grow our family one way or another. Our extended families have been open and accepting. The more the merrier is our family’s dynamic.

What has helped most in developing openness in your adoption experience?  (Kate) Don’t be afraid to be vulnerable. Don’t be afraid to be scared or to say what’s on your mind. If you’re going to be open, you have to be your whole self. Don’t feel like you have to put this best amazing foot forward. You have to put yourself forward because you’re not going to have a lot of success in a real, open relationship with the birth mom if everything is a façade. Just be yourself, and feel comfortable in your decisions and what you think.  Be comfortable in your future ability to be a mom, and never feel that just because you’re having an open adoption that you’re anything less. It just means that you’re welcoming more people in, and that is an amazing thing. Have a the-more-the-merrier attitude. It’s never going hurt a child to have his biological family available to answer questions, and it’s just going to be easier if there’s been a relationship from the beginning. It’s ok to be scared, but have confidence in your own abilities to be a parent and to welcome others in.

Are open adoptions hard? (Brock)  It’s not as much effort as one might think to have an open adoption. We have cell phones today, so we can easily text or send a picture. There are a lot of ways to be open. Ten or 15 years ago, it meant picking up the phone or writing a letter to be open. It’s not a burden today to have openness. It’s a very low-cost and very-high reward for all involved. Each will have to navigate what’s the right amount of openness on both sides. I can’t imagine how anybody wouldn’t benefit from some level of openness.  Whatever both sides agree on, they want to do. It takes time to figure out what’s the right amount of openness. There’s back and forth when working through the openness agreement. You need to let that process play out. We couldn’t imagine not sharing our son’s life with his birth parents.

One of our son’s biological grandmothers thought initially it would be best to have an out-of-state, closed adoption. However, the expectant mom found an adoptive family she trusts (our family!) and decided to place locally with us. Since then, the grandma said she would have been so wrong going [with a closed adoption] because she absolutely loves getting the updates and she doesn’t have to wonder what her grandson would have been like.