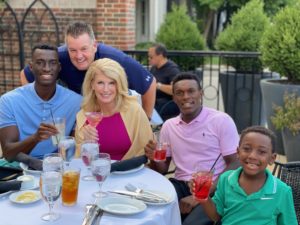 Mike Nardini just began his second term as president of the Good Shepherd board. He and his wife, Chrissy, live in Ladue with their two sons, Harry and T.J., and their foreign exchange student, Aladji. He is the president and founder of IP Symphony and managing partner of 710 Group.

What was your first job?

I started shining work boots for a quarter at my dad’s bar and restaurant while the guys who’d worked the first and third shift at the steel mills sat and drank beer. It was an education. I was a newspaper carrier for the Daily Gazette in Rock Falls, IL. I started when I was 10 years old and, by the time I was 14, I had three routes with all the neighborhood kids working for me. That’s when I handed it down to the neighbor kids and my sister and went to work for my dad in the kitchen.

What’s something you’ve learned this year?

Not to put all my thoughts about politics on Twitter. I’ve also learned how to cook for a crowd. When the restaurants were closed , with three boys plus a lot of kids trickling in and out of our house, I’ve gotten really good at turning out big batches of chicken, hamburger, and spaghetti. I’m pretty good on the grill.

I like for my reach to be further than my grasp.

Why did you choose to be part of the Good Shepherd board?

Former President Norm Conley asked me to join, and I hadn’t ever been on a board before. That was 5 years ago. Two things have kept me engaged: the mission and the staff. They’re completely focused on doing what’s right for the kids. They’ve done an incredible job of improving the organization. Catholic Charities know they don’t have to worry about us; they know we’re doing great work.

For the people who work there, it’s not just a job. It’s a mission. My family has worked with the court system and social workers on behalf of our own children, and we’ve lived some of the issues Good Shepherd tackles  up close and personal. The team at Good Shepherd cares about the child first. They’ve put together processes and methodologies to make sure nothing falls through the cracks. And with those people and skills they help to produce a successful young adult and not another statistic.