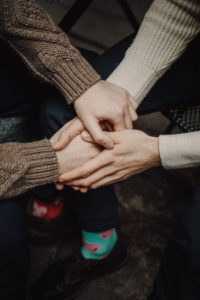 Growing up in foster care isn’t easy. Forced into a reality different than the one you grew up in, not knowing what’s going to happen next, having strangers who tell you they care. When those strangers are empowered to make decisions for you and about your life, it can all be more overwhelming and traumatic than the situation a child is taken out of. All of which emphasizes the importance of programs like Good Shepherd’s Treatment Foster Care program.

Tania* is now 18 but entered foster care at a young age. She was separated from her siblings and family and struggled to communicate the emotional pain, loneliness and fear she felt after being torn away from what she knew.  Then she was placed in a world where she didn’t know what would happen one moment to the next. Tania spent 10 years in a residential facility because she couldn’t find a place where she felt safe enough to communicate and to work on the effects of the trauma she experienced throughout her life. At one point Tania thought remaining in a residential facility until she aged out of foster care was better than taking a chance at another foster home only to have it not work out.

This is what Tania believed until June of 2019 when she met Maria Holmes, a treatment foster parent with Good Shepherd’s Treatment Foster Care program, and she started to have hope that maybe things could change for the better. After a year of struggles, hard work and a lot of courage, Tania has worked through much of the trauma she’s endured throughout her life. She obtained employment, graduated from high school, reconnected with her family and transitioned out of Good Shepherd’s Treatment Foster Care program ready to take that next step in life: learning to live independently.

Although Tania has moved out of Ms. Maria’s home, they’re still close. They communicate almost daily and she often goes back to visit the foster home where she was finally able to find security and peace. The strength in youth like Tania can often get overlooked while they are children in foster care.  Having Treatment Foster Care families and programs like Good Shepherd’s Treatment Foster Care program provides homes and safe spaces that give children like Tania the support and understanding they need to persevere have hope in their future.